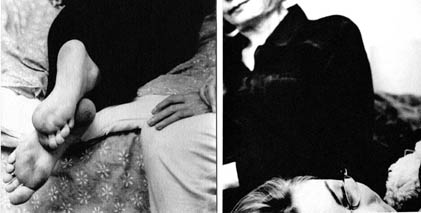 The starting point for these images which I made in 1999, was reading Luce Irigary’s “je, tu, nous – Towards a Culture of Difference” who advocates “in all homes and public places, attractive images (not involving advertising) of mother-daughter couples should be displayed. It’s very damaging for girls always to be faced with representations of mother and son, especially in the religious dimension…The point of these representations is to give girls a valid representation of their genealogy, an essential condition for the constitution of their identity.”

Although the idea of displaying images of mothers and daughters as a means of change is a fairly simplistic one, I decided to aim towards representing some of the complexities of the mother-daughter bond. Motherhood and “daughterhood” are both socially constructed identities bound by history and culture. Our cultural legacy of images of motherhood belongs mainly to Christianity – the Virgin and the (boy)child.

I worked with six mother-daughter couples, interviewing them about their lives and relationships, using their responses as a basis for a final photo-shoot, in an attempt to push the boundaries and supposed “truth” of the documentary image. I have produced a series of diptyches which transcends the idealisation of the mother/daughter relationships but which may also act as a celebration of its complexities.