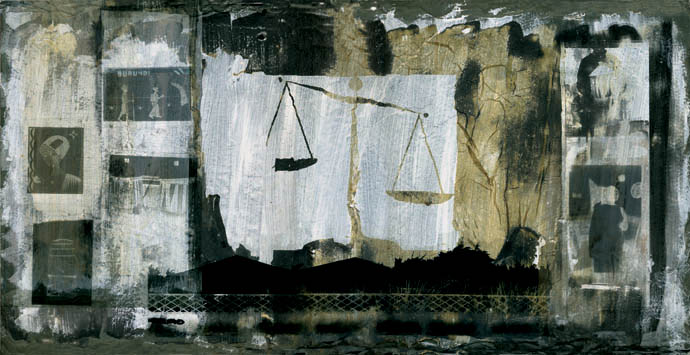 A project inspired by four women refugee academics in a project commissioned by Birkbeck College and CARA Council for Refugee Academics between November 2011 - March 2012
28/02/2012
The Space Between is a piece of work that endeavours to bridge the gap between knowledge and understanding: the knowledge that because of wars and famine, millions of people are displaced every year and have to leave their homes, their lives, the people and the countries that they love, in order to start a new life from scratch in an unknown country and culture: the understanding of what this means to the people who experience it. The Space Between is the journey from one country to another – being forced, because of circumstance, death threats, war and oppression to leave a place where life was good. The brutality of war in one country and the brutality of becoming a refugee in another - of trying to bring all the pieces together to regain the sense of themselves that has been destroyed through war and repression.
It is the experience of people broken by the loss of family, community, identity, self-respect and joy who are working hard to mend their lives, often seeking sanctuary in the country of their oppressors who were the perpetrators of the wars from which they have escaped.
The Space Between is the sense of not belonging in one country or another. It is the myth of return, the space between myth and reality – the memory of their homeland as it was, wanting to return and wishing it to be the same; but at the same time knowing that it will have changed and that they will have changed and that their lives will have been radically transformed because of their experience of having been forced to leave.
The Space Between their own lives and their children’s that are fast becoming part of the new culture in which they are growing up. Children who perhaps do not understand or feel connected to their past histories, their only knowledge of which comes from their parents .
I have listened to and taken photographs of four women who have told me about their lives and about their struggles and determination to survive. Within this interaction, there is a real sense of wanting to fill this space between us, and a desire to understand something of each other’s lives and experiences. I felt that I was reaching out to them and reaching into myself, questioning my own beliefs and prejudices.
I worked with the women using photography and sound-recording to create a final exhibition that is one interpretation (my interpretation) of the women’s lives.
The recorded interviews formed the basis of a series of collaborative photographic “portraits” that do not reveal the women’s identities in the conventional sense, and were taken in negotiation and collaboration with the women. To create the final composite images or “portraits” I asked them to bring me artefacts, recorded stories, found images (e.g. family album photos) written texts or textiles to describe and add detail to their narratives. While working on the composite images individually I finally made the decision to create four very “simple”, uncluttered images that would work together in a series, printing on the solid, reassuring surface of slate and using liquid emulsion which forms a skin that is fragile and easily broken.
The process of building trust and communication between the artist and the women interviewed, and a sense of collaboration and involvement with them in all parts of the project, was key to the creation of a personal piece of work for each woman and a powerful final exhibition that is accessible to a wider audience and that attempts to span The Space Between us.