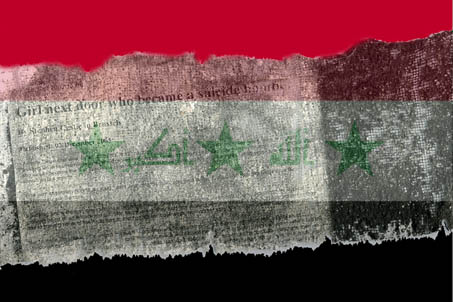 Face Up-The World in Your Face

Peace - Interrupted. Hope interrupted
An installation by Kay Goodridge and Norah Al-Ani
29/09/2008
“I use photography, sound and installation in my journey to understand my own responses to the Iraq war which became stronger and more impassioned in the light of my friendship with my friend and collaborator Norah Al-Ani. “


This piece of work has evolved from an idea by myself, a white British woman Christian and Norah Al-Ani an Iraqi-Irish woman both living in Cambridge, and our conversations about the way in which the Iraq war and subsequent occupation has been reported and represented in the media. It has also been greatly inspired by the “Open Shutters” exhibition in which a group of Iraqi women took photos and wrote openly about their experiences of life in Iraq during the war in an attempt to humanise and personalise the effects of war on people’s everyday lives.
We both had a sense that the media, at the same time as sensationalising reports from countries which were at war or suffering its aftermath, were partly to blame for a sense of apathy or disengagement from events that are happening elsewhere.
Norah and I also talked about how personal attacks - on our personal space as violations or invasions – are part of the microcosm of life . As written in my diary “Parallel to the larger picture “the invasion of countries, of territories. Divisions unsolved. No immediate answer. No instant solution. Conflicts between genders. Power imbalances. It’s all there.”
I had a sense of knowing, of awareness, that my own world cannot be right, that there is “something missing” while there is suffering going on in any part of the world.
The part of “The World in Your Face” that I have worked on, (although only one part and incomplete without Norah’s work) fills this gap in a personal and powerful way. It has made me “feel”. It has made me learn. And it has made me listen. By deciding to use the medium I know best, by using my skills and experience as an artist who uses photography, film and sound (previously also very much issue-based in content), I have stopped being desensitised. I have stopped hiding away or ignoring “the news”. Instead I have had to think and analyse and find ways to look at many aspects of war e.g its effects on women, on everyday life and how, more than anything else, how people struggle to hold onto hope through adversity.
We have both used various sources of information and images in the exhibition in different ways, – we have used images texts and sound from the internet, from newspapers, from magazines and from our own collection of images. In the montage series, the layers of images and text have been covered and re-covered several times e.g. guardian article covered by an image on acetate with the definition of “fragility”, covered again by my own mark-making or ripped images from an anti-war demo.
Through re-appropriation, meanings are rendered meaningless and in a state of constant change. There is no “truth” in this piece, only surmise, confusion and anger as well as a struggle to reconnect and stay connected with the issues at hand.
Next
Previous